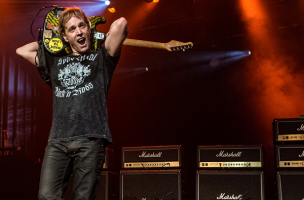 Rob – Derry, it is great to finally get the chance to interview you. So, let’s get started. This year you released “Tell Me What You Want.” Are there any plans to include this on a new album?

Derry – Yes, it’s the first single from our new album that we have been recording in Nashville and the UK. About 80% done and we hope to release this summer.

Rob – Honeymoon Suite as a band has its roots in Canada and has seen more success there and in Europe than the U.S. However, you have success in two songs cracking the top ten rock charts; “New Girl Now” and “Feel It Again” (one of my favorites). Why do you think that you were embraced more outside than inside the U.S.?

Derry – I think the US audience would have embraced us in a huge way as they did with Bryan Adams and Loverboy, but unfortunately, we failed to get that BIG top ten song on our 3rd album.  But that’s the biz and you keep going.

Rob – We talked a while ago that I first saw you guys perform in Pittsburgh, opening for Heart, back in 1986. You had told me about an incident on that tour outside of Madison Square Garden. Could you tell that story to our Masters family?

Derry – I think you must be talking about the equipment being stolen in New Jersey the night before the Meadowlands show. We had the night off and the crew had our truck at a motel in New Jersey.  When they got up in the morning…..no truck.  Guitars, amps, drums stage clothes…everything and we had to play that night opening for Heart.

We discovered how many friends we had that day. Everybody came to the rescue to make it so we could play that night…. especially the Heart band and crew.  Wasn’t the first time we’d been ripped off and probably not the last.  We’re a road band and we’ll figure out how to do the show one way or another.

Rob – Touring can be hard on artists as we have all heard the horror stories. How do you survive when you are on tour?

Derry – Touring today is much easier and more sensible than in the 80’s when worked ourselves really hard because we were building something that still benefits us to this day. We definitely had a good time back then, but we were also had the sense to know that this is a job and you need to deliver when you are on stage.  Everything in moderation.

Rob – There are songs you all have recorded for movie soundtracks. Is there a difference in the process of those recordings vs. recording for your own albums?

Derry – Most of the songs that ended up in soundtracks or TV shows were pulled from our albums or were extra tracks that never made it to the album.  However, Lethal Weapon was written for the movie by Michael Kamen, not us, and we recorded it specifically for that reason.

Rob – Who were your musical influences during your career?

Derry -Big albums for me as a kid were Love it to Death-Alice Cooper, Grand Funk Live, Abraxes-Santana and Machine Head-Deep Purple.  Later Van Halen 1 and every VH record after that.

Rob – There has been a movement afoot that has declared “Rock Is Dead”. What has been your experience in playing to audiences to support or disprove that statement?

Derry – Rock is alive and well. One of the biggest stadium tours this summer will be Def Leppard, Motley Crue, Poison.  There are no great bands anymore like the 70’s and 80’s.  I haven’t seen one in the last 20 years that can hold a candle to Van Halen or Motley Crue or Def Leppard or Journey or Metallica or Rush,etc.  I wish one would come along.

Rob – As a follow-up, are your fans based in one demographic? Or, are you starting to see a mix of ages when you guys tour?

Derry –We are crossing a wide demographic now.  Yes, we have our older fans but many younger ones who are getting into the music for the first time.  Great songs don’t get old like people do.  It’s a feeling that is always young.

Rob – Your music has always been great. Is there any push or expectation for the band to experiment with different genres?

Derry – Honeymoon Suite is Honeymoon Suite. We have our own sound and try and write the best songs we can.  That is what our fans love about the band and you shouldn’t try and sound like someone else because its cool at the time.  Stick to your own thing.

Rob – Finally, what can our Masters community expect next from Honeymoon Suite?

Derry – I think people are going to be surprised in a good way with these new songs. The production is slick and contemporary but still hugely melodic and true to the HMS sound.

Rob – Well, thanks again Derry for taking the time to talk to us here at Masters Radio. We wish you luck with the new album!