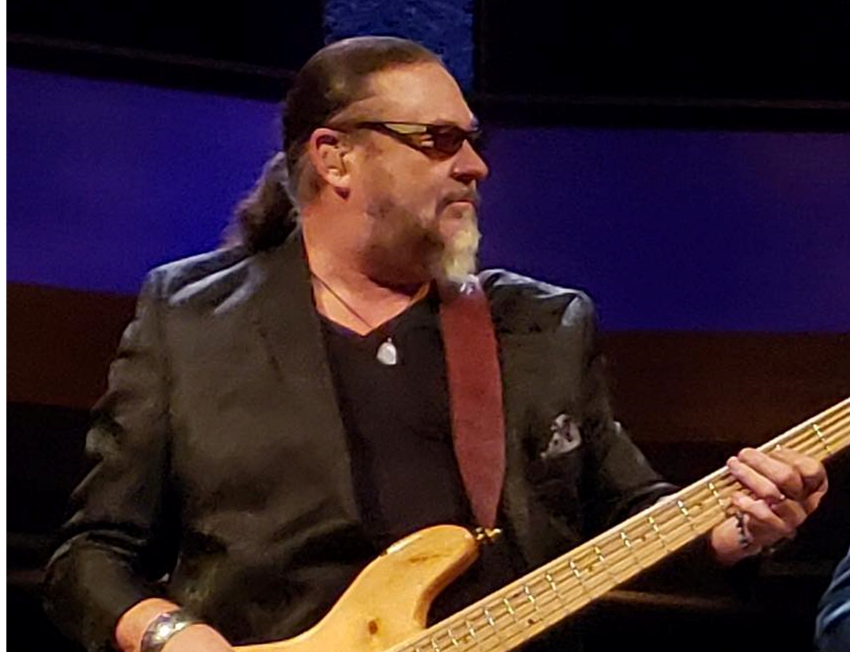 What a thrill to get to interview the great Kenny Lee Lewis. It is refreshing for all of us to have him speak the truth about the industry. Hopefully, we’ll get a chance to see him in concert soon.

Rob – Wow is this cool getting a chance to interview you. One of the first concerts my wife and I saw more than a few decades ago was the Steve Miller Band touring with what I remember being the Doobie Brothers? If you had to guess, how many live events, on a tour, have you played in your lifetime?

Kenny – Hard to calculate. I’ve been playing on tours since I was 18 starting in 1973. I slowed down from touring from 1975 to 1981 because I became a studio session bass player in LA resuming in 1982 by joining the SMB on tour for promoting our Abracadabra album we created. But I’d say well into the thousands.

Rob – Unlike most “real” writers, I don’t do much research on people I talk to. I never liked homework. However, I looked back through your bio and saw how many people you have worked with over the years BEYOND what we mostly are familiar with. Who is missing from that list that you would still like to work with?

Kenny – Oh shoot. My English Invasion idols I guess like Clapton, Jeff Beck, Jimmy Page, Eric Burdon, Van Morrison, and the Stones. I sang with Paul and Ringo once in 1993 so that’s on the books.

Rob – Knowing some of Miller’s background, I understand the connections between you two due to the influence of Jazz. Do you have any plans to cut a new jazz album?

Kenny – Well we just did a two-night concert performance at Jazz at Lincoln Center in NYC last month. Steve played with a handpicked bunch of jazz players (including Lenny White on drums) doing his favorite covers for the first set and then the SMB closed the show. It was videotaped and multi-track recorded so I assume that will become a release at some point.

Rob – I talked with Sonny Charles a couple of years ago when we first started about how throughout his career, he only earned $1K for the hit “Black Pearl.” Have you had a similar experience with the music industry screwing over artists when it comes to money?

Kenny – Oh hell yes. The music publishing business is a rather awful business to get into. The potential for making “mailbox money” in royalties and licensing for perpetuity brings out the worst in human nature. I can give you a bunch of horror stories, but it would be volumes. Let’s just say I’ve got scars and I became my own lawyer through that process and gauntlet of abuse.

Rob – Some of the things about the RRHOF and the induction of the SMB are horrendous. I say this because I personally believe that the HOF shouldn’t be set up like it is. I don’t want to put you on the spot, but besides disbanding the RRHOF all together, what would be one change that would make it better?

Kenny – They need to get Jann Wenner off the board. The conflict of interests is obvious. His relationships with the business part of the industry with the old regime of label moguls, managers and publicists goes back into the sixties. More women need to be involved, both on the selection committee and as inducted artists. If an artist is a solo artist, then yes, let them be solely inducted. If they choose to bring their band along and perform, the board should honor that request and pay for it and give them a seat at a table. If a band product is being inducted, all former members should be invited along with their wives and kids and given seats on the floor. Also, all artists being inducted should have the right of first refusal in picking who they want to induct them. Right now, the board decides that. When Steve was inducted in 2016, they picked The Black Keys (two brothers) to induct Steve. Steve didn’t even know who they were! He originally wanted Elton, but the board refused. It’s all about some manager greasing some palms to get their artist the exposure on HBO. And the event shouldn’t be a ticket rape fest. The prices to go are astronomical. The people are the ones that made the artists, and the people should be able to attend the event at a reasonable price. Not just available to the millionaires who attend. I think nosebleed seats start in the $500 range! Front row is like $100,000! And they might as well just rename the event, The Music Hall of Fame, because they abandoned only inducting rock artists years ago.

Rob – Let’s lighten the interview a bit and try some different types of questions. You have played guitar and bass with the SMB. Is there a favorite instrument for you to play? In or out of that band.

Kenny – I was a studio bass player when I met Steve. Though I have played guitar all my life, at that time I was getting more work as a bass player. When he transferred the 8-track masters my co-writers and I had recorded trying to get our own record deal in 1981, to 24 tracks at Capitol, I had played both bass and guitar on those original masters that became the Abracadabra album you hear today. That’s how I got the gig. I never auditioned for the band. He just liked the guitar parts I had already done and asked me to play guitar for him. Boz Skaggs was the original second guitar player in the Miller band. That’s a tough seat to sit in. Steve expects a certain style, and it must be HIS style, not yours. That’s probably why Boz left the band after three albums. He wanted the freedom to express himself. So, to answer your question, when I was asked to switch from guitar to bass in the touring band in 2011, it was a relief. I now have the freedom to express myself and Steve loves my bass playing and just lets me do my own thing. However, when I play in my own bands as a leader, I prefer to play guitar. It allows me the freedom to express myself in a different way and I can perform for the audience more relaxed. Of course, I use great bass players in my bands!

Rob – You have toured all over the world and have probably played in some great places. Without naming a venue name, which was the worst and why?

Kenny – An outdoor shed in Cincinnati next to the Ohio River in August was the hottest and most unbearable humid heat this little California boy had ever experienced. Just brutal. Also, an indoor hockey rink in Victoria Canada that had no air conditioning in the summer almost eclipsed that. Even in a cool air-conditioned showroom in Vegas, I work up quite a sweat wrestling with that five-string bass with heavy strings. So, when Satan’s Steam room shows up at the gig, this ol’ boy ain’t happy!

Rob – I have interviewed a bunch of artists the past few years and many of them have told me that they have a couple of songs in the wings that they have either never recorded or released. Do you have music that you have kept back? If so, why?

Kenny – Oh yes. Some material is either too political or dark for commercial consumption. But the music arrangements are usually epic. There is one song I wrote in particular called “Don’t Burn” we have in the can we never finished in the SMB that deals with an alien narration who visits earth before mankind evolved then returns millions of years later to a burnt-out cinder after a nuclear war apocalypse. Not exactly your warm, Sunday drive sort of ditty. Ha-ha!

Rob – One of the reasons we had talked to Sonny that I mentioned earlier was the realization that many artists don’t have healthcare insurance. We want to provide that for them in the future. What other benefits do you see artists needing?

Kenny – Grants, national funding, sick leave pay, free dental care, free MRI imaging and X Ray, and substance abuse treatment and counseling. I can’t tell you how many amazingly talented people I’ve known over the years who just wasted away because they couldn’t afford or have access to a helping hand when they fell on hard times or are struggling with their demons. Artists are different than people in the corporate sector and service community. They are in many ways, a self-employed professional who provide a muse for the masses. Like a priest or a pastor, they should be lifted up rather than cast aside. It’s a music ministry.

Rob – Again, thanks Kenny for this short interview. I know we are all busy 24/7 and I would love to sit down with you for a couple of hours just to talk music. My final question is this, if you could have one song you have written carved on your headstone, what would it be and why?

Kenny – I think “Don’t Burn” is an important message. I wrote it decades ago, but it is still relevant to where we are heading. Human nature is a bitch. We are greedy, sinful, jealous, cultish beings who must work really hard on maintaining a moral compass. This team player bullshit in politics resembles the staged, phony pompous of WWE wrestling. The only problem is that we have weapons, and we aren’t afraid to use them. The prospect of becoming a burnt-out cinder is not so radical. We need to be careful and try to reach out across the table and find a common ground, because rust never sleeps.