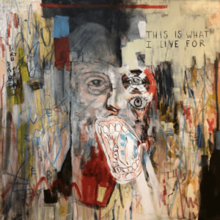 Blue October gives us the new song “Oh My My” from their album “This Is What I Live For.” The american alternative rock band hails from Houston, Texas forming in 1995. Since then, the band has had eleven Top 40 singles over their past seven studio albums and is best known for their platinum singles “Hate Me” and “Into the Ocean” from their 2006 platinum album Foiled.

If Oh My My is any indication of what this album brings us, you can bet that the list of platinum selling albums is going to increase for them.