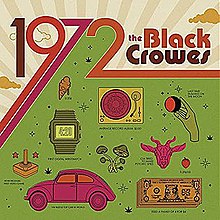 The Black Crowes have released “Papa Was A Rolling Stone” from their new album, 1972. It was released as an EP last week and is a great cover album. I just wish that they would have created an album of NEW music after waiting THIS LONG for a Black Crowes effort. Still, great song for a first cut.

Give it a listen and then turn your attention to the new EP. If anything, it will make you smile.